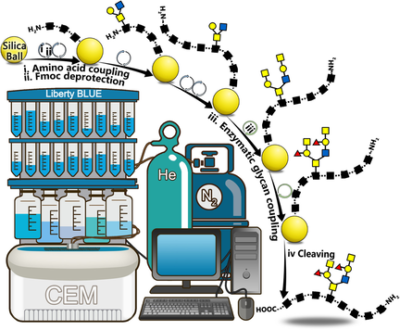 Historically, researchers have put considerable effort into developing automation systems to prepare natural biopolymers such as peptides and oligonucleotides. The availability of such mature systems has significantly advanced the development of natural science. Over the past twenty years, breakthroughs in automated synthesis of oligosaccharides have also been achieved. A machine‐driven platform for glycopeptide synthesis by a reconstructed peptide synthesizer is described. The designed platform is based on the use of an amine‐functionalized silica resin to facilitate the chemical synthesis of peptides in organic solvent as well as the enzymatic synthesis of glycan epitopes in the aqueous phase in a single reaction vessel. Both syntheses were performed by a peptide synthesizer in a semiautomated manner.

A general cascade synthesis of pyrroles from nitroarenes is reported. The process is catalyzed by a heterogeneous cobalt catalyst using either dihydrogen, formic acid, or a CO/H2O mixture as reducing agents. This strategy was applied to the synthesis of biologically active compounds, including (+)‐Isamoltane.

A bifunctional 3d‐metal catalyst for the cascade synthesis of diverse pyrroles from nitroarenes is presented. The optimal catalytic system Co/NGr‐C@SiO2‐L is obtained by pyrolysis of a cobalt‐impregnated composite followed by subsequent selective leaching. In the presence of this material, (transfer) hydrogenation of easily available nitroarenes and subsequent Paal–Knorr/Clauson‐Kass condensation provides >40 pyrroles in good to high yields using dihydrogen, formic acid, or a CO/H2O mixture (WGSR conditions) as reductant. In addition to the favorable step economy, this straightforward domino process does not require any solvents or external co‐catalysts. The general synthetic utility of this methodology was demonstrated on a variety of functionalized substrates including the preparation of biologically active and pharmaceutically relevant compounds, for example, (+)‐Isamoltane.

A wide range of allylic zinc reagents as well as zinc enolates open [1.1.1]propellane to generate zincated bicyclopentanes (BCPs) in a highly regioselective manner. These intermediate zinc reagents are trapped with various electrophiles, giving access to fully functionalized BCPs including a BCP‐analogue of the synthetic opioid pethidine.

We report a range of highly regioselective openings of [1.1.1]propellane with various allylic zinc halides, as well as zinc enolates of ketones, esters and nitriles. The resulting zincated bicyclopentanes (BCPs) were trapped with a range of electrophiles including acyl chlorides, sulfonothioates, hydroxylamino benzoates, tosyl cyanide as well as aryl and allyl halides, generating highly functionalized BCP‐derivatives. The unusually high regioselectivity of these reactions has been rationalized using DFT calculations. A bioisostere of the synthetic opioid pethidine was prepared in 95 % yield in one step using this method. 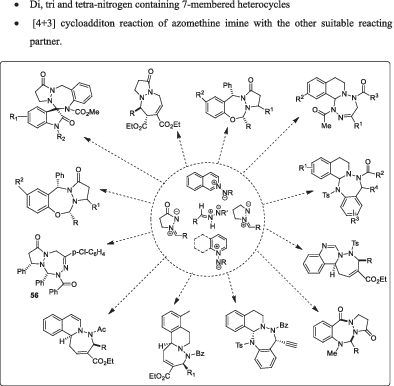 Di, tri and tetra‐nitrogen containing 7‐membered heterocycles are the key building blocks for natural and medicinally active compounds. They are using as antidepressants, antiulcer, antibiotics, antiemetic and also used as herbicides and insecticides. These building blocks can be synthesized easily from [4 + 3] cycloadditon reaction of azomethine imine with the other suitable reacting partner. Research on this area is very much important as this area is not much explored till now. Hence, the synthetic literature survey towards the di‐nitrogen containing heterocycles is paramount importance. Herein, we report numerous synthetic routes (metal catalyzed, metal free, asymmetric) of di‐nitrogen containing 7‐membered heterocycle through [4 + 3] cycloadditon reaction of the last 10 years (2011‐2019).

Amides and esters bearing a quaternary β‐carbon atom are synthesized by a domino reaction involving C(sp3)−H activation, 1,4‐Pd shift, and amino/alkoxycarbonylation. Mechanistic studies showed that the aminocarbonylation of the σ‐alkylpalladium intermediate arising from the palladium shift is fast, and leads to the amide rather than the previously reported indanone product.

The 1,4‐palladium shift strategy allows the functionalization of remote C−H bonds that are difficult to reach directly. Reported here is a domino reaction proceeding by C(sp3)−H activation, 1,4‐palladium shift, and amino‐ or alkoxycarbonylation, which generates a variety of amides and esters bearing a quaternary β‐carbon atom. Mechanistic studies showed that the aminocarbonylation of the σ‐alkylpalladium intermediate arising from the palladium shift is fast using PPh3 as the ligand, and leads to the amide rather than the previously reported indanone product.

Current biological research increasingly focusses on large human proteins and their complexes. Such proteins are difficult to study by NMR spectroscopy because they often can only be produced in higher eukaryotic expression systems, where deuteration is hardly feasible. Here, we present the XL‐ALSOFAST‐[13C,1H]‐HMQC experiment with much improved sensitivity for fully protonated high molecular weight proteins. For the tested systems ranging from 100 to 240 kDa in size, 3‐fold higher sensitivity was obtained on average for fast relaxing signals compared to current state‐of‐the‐art experiments. In the XL‐ALSOFAST approach, non‐observed magnetisation is optimally exploited and transverse relaxation is minimized by the newly introduced concept of delayed decoupling. The combination of high sensitivity and superior artefact suppression makes it ideal for studying inherently unstable membrane proteins or for analysing therapeutic antibodies at natural 13C abundance. The XL‐ALSOFAST and delayed decoupling will therefore expand the range of biomolecular systems accessible to NMR spectroscopy. 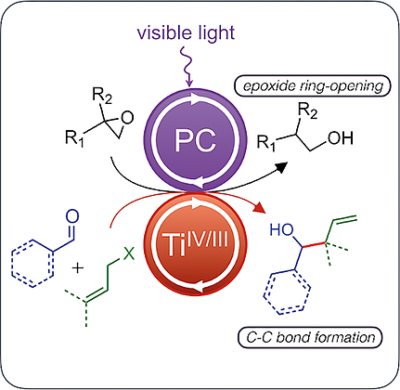 Metallaphotoredox catalysis is emerging as an excellent and versatile cornerstone for the development of modern synthetic methodologies. Recent examples have displayed how the redox chemistry of titanium‐based complexes can be triggered by organic and inorganic chromophores in catalytic processes activated by visible‐light, affording synthetically demanding products.

Titanium is one of the most abundant and environmentally innocuous metals. Ti‐based organometallic compounds have long been used as versatile homogeneous catalysts in synthetic chemistry and still remain highly attractive for the development of sustainable transformations. With the emerging role of photoredox catalysis, the selectivity of the radical initiation in electron transfer‐mediated reactions has been shown to be fundamental in terms of synthesis efficiency. Recent examples have displayed the effectiveness of inorganic and organic chromophores at the excited state in triggering the redox chemistry of TiIV/III complexes. In this minireview, we will illustrate the underlying principles and practicability of these – still uncommon – metallaphotoredox catalytic reactions. 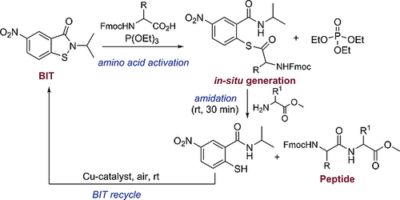 A fast and efficient coupling protocol for SPPS using benzoisothiazolone (BIT) under mild conditions with minimal waste was developed. BIT recycling is demonstrated on a gram scale reaction and amino acid consumption has been minimized irrespective of the peptide length. This coupling protocol has been successfully applied for the synthesis of side chain of recently discovered antibiotic, teixobactin.

Solid‐phase peptide synthesis (SPPS), a preferred synthetic procedure, generates by‐products and effluents in multiple equivalents for one equivalent of desired product. Presented herein is the use of a fast and efficient coupling protocol for SPPS using a benzoisothiazolone (BIT), which can be fully recycled. The BIT, as redox activator, works under very mild conditions and generates minimal amount of waste. As a case study, the BIT coupling protocol is applied to the synthesis of side chain of the recently discovered antibiotic, teixobactin.

A procedure for the O‐arylation of the side chain of tyrosine using triarylbismuth reagents is reported. The reaction is performed in dichloromethane under oxygen at 50 °C in the presence of pyridine, is promoted by copper diacetate, shows excellent scope and functional group tolerance, and retains the integrity of the chiral center. The reactivity of other amino acids possessing a nucleophilic side chain under these conditions is investigated. O‐Arylation of tyrosine‐containing dipeptides and tripeptides is achieved.

A general method for the O‐arylation of the side chain of tyrosine using triarylbismuth reagents is reported. The reaction is mediated by copper diacetate, operates at 50 °C under oxygen in dichloromethane in the presence of pyridine, shows excellent functional group compatibility, and retains the integrity of the stereogenic center. The protocol was used to arylate the tyrosine residue of dipeptides and tripeptides.

Fluorosteroid pharmaceuticals are prepared industrially by electrophilic fluorination. Quantitative insights into the synthesis of 6‐fluorosteroids could lead to more efficient processes. Here, kinetic and analytical studies upon a range of fluorinations of steroid enol esters, and subsequent epimerisation towards the α‐epimer are described. X‐ray crystallography is exploited to deliver unambiguous assignments of absolute configurations.

Fluorinated steroids, which are synthesised by electrophilic fluorination, form a significant proportion of marketed pharmaceuticals. To gain quantitative information on fluorination at the 6‐position of steroids, kinetics studies were conducted on enol ester derivatives of progesterone, testosterone, cholestenone and hydrocortisone with a series of electrophilic N−F reagents. The stereoselectivities of fluorination reactions of progesterone enol acetate and the kinetic effects of additives, including methanol and water, were investigated. The kinetics of epimerisation of 6β‐fluoroprogesterone to the more pharmacologically active 6α‐fluoroprogesterone isomer in HCl/acetic acid solutions are detailed.